An Easier Way to Install the Triumph Center Stand Spring

How hard can it be to install a center stand spring, right? Hook one end onto the center stand and stretch the spring far enough to slip the other end over the hook on the frame. Nothing to it!

But wait. This isn't your screen door's spring, this is the Triumph center stand SUPER-SPRING!

The Ugly (don't get bent)

There's the old "use a bar of some kind to lever the spring's loose end over the hook". This method gets you so close. So close. But that's as close as you get. And it's a terrific way to mar up your newly powder-coated frame!

My favorite was gripping the loose end with vice-grips and pushing or pulling until I began getting bug-eyed. I actually succeeded that way once, but nearly blew a gasket doing it. A fellow could hurt himself that way!

Both those methods probably succeed eventually, but they entail lots of strain accompanied by much un-flattering grunting. And sometimes your super-spring ends up getting bent. Need I say more?

The "penny trick" for installing center stand springs has been going around for years. It goes like this: simply insert pennies or washers between the coils of the spring until it's long enough to slip right over the hooks at either end and then pull out the pennies with a pair of pliers.

At first glance this method seems to be pure genius. However, if you actually try it you'll discover as I did how difficult it is to keep the pennies and washers from falling out as new ones are added. Reliable sources say that it can be done, but let me assure you - it's not as easy as one might suppose and it certainly helps if you have three hands.

Note: I am slowly being convinced that the penny/washer method can actually work. On page 8 of the April 2020 issue of The CVMG News a tech tip by a member of the Keystone section explains how to use the washer method and it features a photo of a center stand spring stuffed with washers. It can be done! Give it a shot and let me know how it works for you.

The simple trick that made the job child's play for me was to pull the spring on with a piece of string. Step-by-step instructions with photos below:

When installing the center stand spring take all necessary precautions to prevent your motorcycle from falling on you! In the accompanying photos the bike is supported with chain hoist and cable.

It may take a couple of tries to slip the spring over the hook, but stretching the spring is pretty easy.

The first time I tried this trick I used a piece of 1/4" polypropylene rope and it was difficult to remove the rope, I ended up cutting it out. The next time I used ordinary household sisal string (doubled) and I could just tear it out. I've also used a length of strong stainless steel wire and removing it was quite easy, I just snipped one side of the loop near the frame hook and the wire came right out with a sharp tug.

For clarity these pictures were taken with the engine out of the frame, but the string theory also works with the engine in the frame. Admittedly, two people, one to stretch the spring using the string and the other to guide it over the frame hook, make it much easier.

Finally, if you have some time on your hands, you could fabricate a " spring puller" like one of the ones described by Hans Muller. 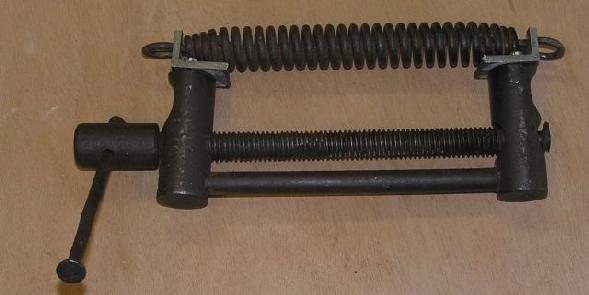